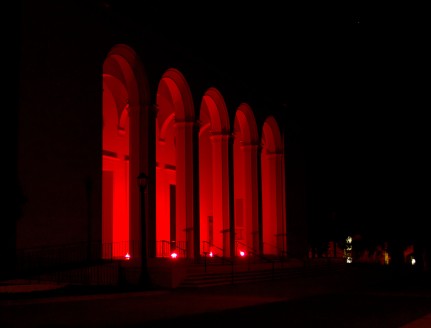 This Pacific Standard Time event Pomona College, recreates James Turrell’s 1971 flare performance. In 1971 Turrell staged a work utilizing highway flares in and around the arcaded façade of Bridges Auditorium, the central building on Marston Quad at Pomona College. According to Turrell and other audience members, at dusk, students (who were already in place in the alcoves) lit orange flares simultaneously. Almost immediately, the building was aglow with a brilliant orange hazy light and smoke.